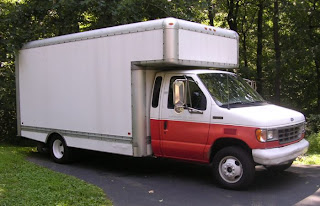 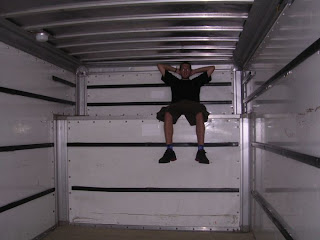 I spent my first night in Truckhouse last night. The only furnishing is the nice new piece of carpeting on the floor. I brought out an old camping air mattress, a blanket, a pillow, and a candle. I slept very well. It reminded me of camping. Being closer to the outdoors, I could hear all of the sounds of insects and wind. So it felt kinda like a big solid tent. I liked it.

(The pictures were taken yesterday.)

Camped out in the box with just the bare minimum gave me an epiphany. I'm not going to worry about electricity, running water, a toilet, a couch or whatever else right now. When I park in Philly I'm just going to see how it goes. When I feel like I really need something, I'll worry about it then. If something doesn't cause an instant pressing need, then great - I can do without it. I really can't picture getting involved with cutting a door in the side or installing solar panels and composting toilets just yet. I'm going to roll with what I have, which is a good shelter and a fine place to sleep. I even put a nice chair in there today.

I solved the problem of not being able to lock the roll-up door from the inside. I had designs of locking devices running through my head for a good long time before I realized I could just wedge a block of wood above the sliding door to keep anyone from being able to lift it. Sometimes the best solutions are wicked simple.
Posted by Chris Harne at 11:50 AM No comments:

Got the truck, it fits in a parking space.

Yestderday was August 15th, and yesterday I went and got the truck. Throughout the day, I called a couple places for insurance quotes. After the typical hassle you would expect when you deal with anything involving cars, I got a policy. $40 a month - not bad. The hassle was all about the VIN #. The one I had wasn't working for the insurance agent. I plugged it into a Google-searched lookup thing, and it worked fine - but for some reason, it didn't work for him. Then he approved the policy anyway. Next I got the registration. This is too boring to mention, but it happened, and it was expensive. Pennsylvania had to get it's cut.

I was kinda waiting to figure out how to get a ride down to Wilmington, but I got restless watching a Top Chef marathon on Bravo, and decided to hop on my city bike to get down there. I stuck the new license plate on, taped on the temporary registration paper, and chugged back to Kennett Square. The truck is parked in my parents' driveway right now. They'll be back from the beach on Saturday. I don't know if I want to have it sitting here when they get back, but it's not much use hiding it now. Gotta face facts. I'm moving in.

Right now the only furnishing is a piece of carpet covering a little over half the floor. I'm looking on Freecycle for a mattress and a couch. 'Pparently the 'no electricity' version of the Envirolet toilet requires a small container to drain into. The 120v electric one does not. I don't think I'm ready for a full solar setup just yet - I'm still thinking.
Posted by Chris Harne at 3:27 PM No comments:

After doing a slight amount of further research, which means looking at eBay motors again, I decided to go down to the U-Haul location in Wilmington Delaware, and just get the truck that I wanted anyway. I test drove it for about a mile and asked who was in charge of lowering the price. It was listed for $5946, but I said I wouldn't be very interested unless it could come down to $5000. That price was obviously too easily agreeable. I thought it was a lowball offer, but I guess I'm still learning. I was picturing more arguing, adamant hand gestures, and finally a couple tears running down someone's face as they told me "ok... i suppose we can let her go for $5000." As I pulled back into the lot I said that I was aware that there were going to be processing fees and extra charges and such - and that I would 'prefer' that the total amount be $5000. So, that's some kind of bargaining, right? Well I got my price. $5000. First the guy had to make a call to confirm everything. He wrote some stuff on a piece of paper and pointed to the figure of $5267, which is what it would be after such and such plus 1.8% for using a credit card. I said "great - can we make that $5000?" Then another call - and $5000 it was.

The credit card swiper wasn't working at that location, so after some calls we went to the Chester Pennsylvania location down the road. It wasn't much easier there. After an hour and a half and a lot of tech support calls, I finally got rung up for $5000.

I should also mention that I asked my credit union for a car loan or a personal loan. With a 10+ year old vehicle and no verifiable income, neither is possible. But it is notable that their personal loan rate is 13.75%. Notable because I called my credit card company this morning and got my rate lowered to 11.99%. So that further justified an IMMEDIATE PURCHASE to me. So don't worry about accumulating debts - I'm gonna be livin' in a truck. Don't worry about what my parents think about the idea either. They fucking hate it.
Posted by Chris Harne at 3:33 PM No comments:

The time is afoot

I've been talking about converting a box truck into an apartment for many months. I'm running out of reasons to put it off. First, I had to go on a huge bicycle adventure. Done. I have no apartment lease. Great! Now it's time to get to work. After a little bit of research, I've decided to buy a used diesel U-Haul with a 17 foot box. The 26 foot is a little roomier, but ultimately I decided on the 17 foot.
17 footer
26 foot beast

I feel more comfortable with the business part of the truck being an E-350 van vs. a huge TRUCK kinda truck. I've had a van. I'm comfortable with vans. Van it will be. Ultimately, I think the 17 foot box will be plenty of space for me, and I am attracted by the fact that it seems more "low key" parked in a city setting.

I've made a decision about what kind of truck to start with, but I still have a lot of work ahead of me. The first order of business is obviously to buy the truck. Next, I want to install a door on the side to use instead of the roll-up door on the back. The roll-up door can't be opened from the inside. That would be a problem. After installing a 'normal' door on the side, I'm going to need a toilet. I've decided the best option for this is the "Envirolet." It's expensive, but it's the toilet that will make living in a truck the most reasonable.

After those important initial needs are addressed, I will be able to live in the truck. But the work will be far from over at that point. The next order of business would be a window. Due to the urban setting, I picture a sliding window with burglar bars over it. Again, something that appears low-key is important. Maybe some windows similar to the ones used on horse trailers, or some campers - placed well above eye level.

With natural light added, I will begin to feel more comfortable. But I won't stop there. I want electricity. Two large solar panels charging a couple batteries should do the trick. I'm going to buy some kind of kit. Hopefully, that will provide more than enough power to run a small space heater. In winter, that will be very important. I could use a small portable propane heater in a pinch, but would prefer an electric space heater as the main unit.

I've glossed over furniture to talk about the important stuff. The truck has an overhang, or 'attic' over the cab. This shelf has plenty of space for a mattress and small nightstand or shelf. Directly under this will be my couch - whatever is free. The floor will be carpeted, because carpets are easy to get for free, and don't require serious installation. Shelving will all be done with milk crates stacked up and zip tied together. It doesn't get easier or more free than milk crates. Everything I own will be stored in them.

In addition to all those considerations, I need to find a small attractive way to cover the toilet from view. You know - in case I have guests. I'd also like to devise a way to get maximum ventilation by opening the entire rear roll-up door, but not allowing people to see my living space. White curtains, maybe? Wall of milk crates facing in?

What else do I need? A lamp, a small stereo, and a laptop would be nice. But nothing that takes up much space.
Posted by Chris Harne at 9:45 PM No comments: